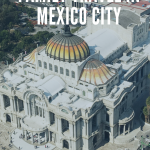 Mexico City is a high-altitude (7000 feet) sprawling metropolis with many cultural treasures as well as a dynamic food scene. It’s a city of contradictions as many larger cities are; beautiful residential areas juxtaposed against rife poverty, contemporary art galleries and museums nearby old fashioned convenience stores.  There’s plenty to explore and more than you’d think for kids if you know where to look. Mexico City is extremely welcoming to children and we lost count at the number lines we cut (thank you customs) or the number of women who wanted to pat our kids on the head.

When we told our family we were headed to Mexico City with our kids (then 6 months and 3 years) we were met with a lot of concerns about our safety.  Mexico City’s reputation certainly suffered after a string of violence and crime decades ago, but over the last 15 years has made considerable strides to improve safety and infrastructure to bring tourism back to Mexico’s capital.

The enormity of Mexico City can make it feel tricky to pick a home base for your vacation.  There are several distinct neighborhoods all that offer slightly different experiences depending on your preference and itinerary (I’ll touch on a few).

Centro Historico is at the heart of it all where you’ll find most of the city’s important sights and cultural gems.  It’s also bustling so it can get noisy and crowded. If you’re staying for just a weekend it would be my pick, it’s the most convenient to all the main sights.

We chose the Paseo de la Reforma neighborhood.  It’s along their central avenue and is known for luxury hotels including the Four Seasons and St. Regis.  It’s fairly central and well situated near the Chapultepec which is their version of Central Park. We chose Le Meridien Hotel for its central location and it had suites for a reasonable price which is our preference when we travel with our kids since the extra space is nice.

The Polanco area is also a higher end neighborhood and favored among business travelers but also enjoyed by tourists alike due to its sweeping views of the Bosque de Chapultepec.  There you’ll find the W hotel and the Camino Real.

We’ve had to learn to pick and choose since we started traveling as a family.  Our tiny travelers make for a reduced pace and we often accommodate for naps and time to decompress since it can get overwhelming at this age (under 5).   Our days consisted of breakfast and then a morning activity, back to the hotel for naps and then an evening activity/dinner.  We were also battling illness on this trip which made us slow down considerably. Sometimes you have to roll with it.

We checked out the Museo del Templo Mayor which was built on the ruins of Tenochtitlan (the original city founded in 1365).  The temple-pyramid was destroyed during the Spanish conquest and buried for centuries until it was unearthed in the 1970’s. It’s been turned into an open-air museum and is a must-see if you’re in Mexico City.

After you’ve taken in the sights at Templo Mayor, take a walk through the Zocalo, one of the main squares that served as the center of government and religious activity after the fall of the Tenochtitlan.  Here you can admire the Palacio Nacional and the famous Catedral Metropolitana. If you want a great bird’s eye view of the city check out Torre Latinoamericana and take the elevator to the 44th floor where on a clear day you can see surrounding volcanoes.

If you’re there on a Sunday the Paseo de la Reforma walk is great for families.  It’s closed to cars on Sundays and runners, bikers and families come out in masses to enjoy a leisurely stroll past several of the monuments and sculptures all the way to the entrance of the Bosque de Chapultepec (it’s a decent walk)

Bosque de Chapultepec is an enormous urban park with dozens of fountains, gardens, paddle boats.  We skipped the museums (which are supposed to be excellent) and walked the paths, played at the playgrounds, ate cotton candy and the kids got their faces painted.  It’s a great spot for families looking to get an escape from the city.

We checked out the Plaza Garibaldi which on the weekend features mariachi bands playing traditional music in the main square.  I mention it because it’s common with locals and tourists but it was the only area were traveled to that felt a bit unsafe. Though we had no issues, there was an enormous police presence nearby in full riot gear- we didn’t hang out long.

Along with the Templo Mayor and the Paseo de la Reforma walk, some highlights for us included checking out local markets and taking day trips to the Basilica de Santa Maria de Guadalupe, the pyramids of Teotihuacan, and the city of Puebla.  We absolutely loved our day excursions.

The food in Mexico City is an attraction itself.  In 2010 UNESCO named traditional Mexican cuisine as an Intangible Cultural Heritage of Humanity and Mexico City is here for it.  While it’s known for its haute cuisine (think Pujol, one of the top restaurants in the world) it also has a vibrant street food scene.  Here are some must try foods when you’re in Mexico City.

There are great opportunities to take a food tour if your family is a foodie one!

If you’re motivated to see a side of Mexico that isn’t just beaches consider a jaunt to Mexico City and take in some of the interesting history and sights!

5 Great Activities to do in Asheville with Kids

This error message is only visible to WordPress admins


Error: API requests are being delayed for this account. New posts will not be retrieved.