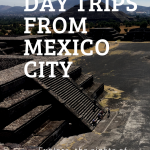 Mexico City has been on the rebound for the last several decades, cleaning up their reputation as a dangerous travel destination (due to increased crime in the 90’s) to a dynamic city filled with culture, architecture and a famous food scene.  It’s a great spot if you’re interested in seeing another side of Mexico than just the gorgeous beaches. We took our family there for a week vacation and were surprised by the amount of history and sights we were able to see.

Mexico City’s central location lends itself as a great jumping off point for visiting some of the amazing ancient ruins and nearby charming smaller colonial towns.  While there’s plenty to keep you busy in Mexico City we were keen to get out of the urban sprawl and see some of these impressive sights. Because we don’t speak Spanish well and weren’t comfortable driving in and around the city we chose to take a private tour which made it much easier and less stressful than figuring out driving/directions/public transportation with kids (we arranged it with our hotel concierge the day before we went).

Our first day trip was out to Teotihuacan.  It’s the most visited archaeological site in all of Mexico.  It’s an hour east of the city and is known for its well preserved temple-pyramids.  It’s believed major construction on the pyramids began around 100 BC through AD 250 and at one time it was estimated it covered 20 miles and housed 150,000 people. It’s impressive!

Visitors are able to climb to the top of both pyramids, the largest and most impressive being the Pyramid of the Sun (Piramide del Sol).  It’s a steep 230 foot climb with some craggy steps here and there so take your time. We trekked up there as a family and were rewarded with some amazing views of the surrounding area.

After that take a stroll down the Avenue of the Dead which is the major artery of what was this sprawling city.  Along the walk you can check out several of the other buildings as well as the Plaza of the Moon and the Pyramid of the Moon.  This plaza was considered one of the principal ritual areas in the city. The real benefit to traveling with a guide is that they can give you more information on the historical significance of the buildings, the carvings, and paint a picture of what life what thought to have been like for those who lived during this time.

On our ride back we stopped at this famed Basilica.  Mexico is a devout Catholic culture. The Basilica de Santa Maria de Guadalupe is the second most visited Catholic pilgrimage site in the world after the Vatican.  In 1531 the Saint Juan Diego had a vision of Virgin Mary speaking native Nahuatl whose image then appeared on his shroud. It’s significant because Spanish missionaries had a hard time converting native people to Catholicism and the story of a Nahuatl- speaking Virgin Mary sparked mass conversion in Mexico City.  She’s become an iconic symbol of Mexican Catholicism. Here, you can get a look at his shroud which hangs behind the altar. There’s a moving walkway to prevent traffic jams.

We arrived just as a mass was letting out and waited at the gates to enter.  The number of ladies who blessed the kids and patted their heads on their way out was impressive.  It’s really a very child-friendly culture.

We had such a positive experience on our day trip the day before and keen to see more sights, so we called our tour guide back for a second day.

On our way to Puebla we stopped in Cholula which has one of the largest pyramids on the continent.  You wouldn’t know it though. When you arrive, it looks like a large church sitting on top of a large hill – the church was built on top of the pyramid and covered with earth.  It’s been fully excavated and visitors start at the base and work your way up through the pyramid to the top where the church is located through a series of spooky (hello claustrophobia!) tunnels.  On a clear day the views are phenomenal. There’s also a little museum across from the ticket booth to give you more information.

The area in and around Puebla is known for its mole and that was what we ordered for lunch.  Mole Poblano is one of their signature dishes (think thick heavily spiced sauce with dozens of ingredients) and the legend goes the dish was first created by nuns of the Convento de Santa Rosa in Puebla.  Definitely give it a try if you’re there!

Puebla was next and it was a treat.  It’s a beautiful colonial-era town with a well preserved architecture and sights.  The Zocalo or main square is a great place to start as several sites are located in the vicinity.  It’s filled with enormous balloon stands, cafes, park benches and offers great people watching.

On the South side of the square there’s the Catedral de la Inmaculada Concepción which is coined as one of the most beautiful churches in Mexico.  It was partially damaged in the earthquake that occurred 2 months before but fortunately was not demolished.

There are several great baroque churches in town as well as museums.  The Museo Amparo is an excellent art and anthropology museum housing 2,000 pieces of pre-Columbian art and artifacts.
Puebla is also known for its artisans and crafts and there’s several great markets to peruse and shop for Talavera pottery, clothing and antiques.

We really enjoyed Puebla and agree that if we went back we’d actually stay there and devote more time to the area.  We just skimmed the surface but there was plenty to see and do that would keep you busy for a few days.

5 Great Activities to do in Asheville with Kids