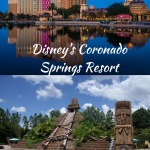 Disney’s Coronado Springs Resort is inspired by Spanish explorers and centered around Lago Dorado.  It’s considered one of Disney’s mid-range properties in terms of pricing and rooms start in the mid 200’s per night.  While none of the parks are particularly far Coronado Springs is closest to Animal Kingdom making it a great choice if it’s your primary focus.

It’s a rather sprawling complex separated into groups of buildings: Casitas, Cabanas or Ranchos.  People always want to know which is the best location, but really it depends on your preference.

The Casitas are closest to the El Centro (the main building) and convention center.  It’s also one of the first stops to pick up and drop off for the bus taking you to the parks.  It is though a little further to the main pool, arcade, etc.

The Cabanas are great for kids as they’re centrally located to the main pool and a short walk to El Centro.

Ranchos is the most remote and quiet.  It can be close to the pool depending on your location in the complex and is about a 10 minute walk to El Centro.

There’s also the brand new Gran Destino Tower which opened mid 2019.  It’s a 15 story building offering standard rooms, suites (sleeps up to 6) and a club level which gives you access to a lounge offering food throughout the day and concierge staff who can aid in dinner reservations and booking fast passes.

There’s plenty of dining options on site including some newer restaurants set to open along with the new tower and renovations.  Dining plans are accepted.

We tried out the first three and enjoyed the Mexican fusion options as well as easy options for the kids.

The main pool complex known as the Dig Site has a Mayan theme featuring a large pyramid with a waterslide and adjacent playground.  We enjoyed the Dig Site as it also has a small splash pad for littles. It also boasts the largest hot tub of all the Disney properties, enough room to fit 22 people, so invite your friends!  For those who are seeking a quieter pool experience there are smaller pools located at each of the building complexes.

There’s also a nightly campfire with an opportunity to roast marshmallows, a nearby arcade and a sand volleyball complex.  At most of the Disney resorts they show movies under the stars at night rotating your favorite Disney films.

For the fitness buffs there’s a jogging trail around the lake as well as a brand new fitness facility in the Gran Destino Tower.  They’ve also added spa services with the opening of the new tower as part of their fitness complex.

Transportation to all of the parks including the waterparks and Disney Springs is through their complimentary bus system.  The main stop is at El Centro but each accommodation complex offers their own bus stop as well.

If you elect for a private transfer around Disney’s properties or to the airport there’s also Minnie Vans (operated through Lyft) and are a super cute way to travel.

Otherwise, since you’re staying at a Disney property there are complimentary transfers through their Magical Express back and forth from the airport and they’ll also take care of your bags (advanced reservations required).

The Cabins at Disney’s Fort Wilderness