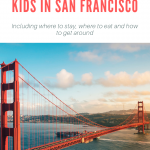 San Francisco is a great family friendly destination with tons to do and see.  There’s plenty to keep you busy for weeks but most visitors stay an average of 2-3 nights according to San Francisco Travel.   Conveniently situated Near Napa Valley (1.5 hours) and the famed Yosemite National Park (3-4 hours), it lends itself as a destination you can combine with other sightseeing if you should so choose.  We combined a work trip with a vacation and spent 3 days in San Francisco and 3 days in Yosemite National Park. Our daughter was two at the time and there was plenty to keep us entertained.

There are several distinct neighborhoods in San Francisco all with varying draws.  If you’re planning on focusing on most of the main tourist sites Union Square and Fisherman’s Wharf are two of the better options.  Union Square is centrally located and a short walk to several of the popular sites. Fisherman’s Wharf is where you’ll find the famed Pier 39, Ghirardelli square and is a jumping off point for most of the bay cruises.  We stayed at the Marriott Marquis in Union Square because we had points and it’s where the conference was located. We also liked that it offered suites which gave us some extra space with a little one. Below are listed several family friendly hotels in the area chosen due to being well situated, have suite options and have some child friendly perks or amenities.

Marriott Union Square– in the heart of the city, they offer rooms with 2 double beds or suites

Westin St. Francis Union Square– a historic hotel within walking distance to Chinatown, located across from one of the trolly stops

The Fairmont– a historic hotel, in December they offer a special afternoon tea with kids menu

Intercontinental – a landmark hotel, breakfast buffet with reduced prices for children under 12, complimentary transportation to union square and local destinations

Located along the city’s eastern shoreline it’s near some of the piers offering trips to Alcatraz as well as the Exploratorium.

This area is on the northern waterfront and is one of the busier tourist areas.  It’s near Pier 39 and Ghirardelli Square.

Argonaut– kids pick out a toy from the treasure chest at check-in, suites and standard rooms are available

Top 7 Things to Do with Kids

Aquarium of the Bay– located on the waterfront on the edge of Pier 39 it’s home to 20,000 local marine animals.  It’s focused on local marine life from San Francisco bay and surrounding rivers.

California Academy of Sciences– with over 46 million specimens it’s one of the largest natural history museums in the world.  Featuring a real Rainforest, Aquarium, and many other exhibits this is great for all ages and will keep your kids busy and stimulated for hours.

Exploratorium– located along the Embarcadero this museum explores art, science and human perception.  They focus on inquiry based learning and encourage asking questions.

San Francisco Zoo– Though it’s outside of town (we took uber and a taxi), it’s a great destination if your kids love animals.  It’s 100 acres with a Gorilla preserve, Lemur forest and more.

Cruise San Francisco Bay–  get out and see San Francisco from the water.  Sail past the Golden Gate Bridge and Alcatraz (separate tour if you want to visit the island).  Most tours are roughly an hour.

Pier 39– the famed Pier 39 is one of the busier tourist areas.  It’s where you’ll find the famous sea lions, view Alcatraz and the Golden Gate bridge from dry land, and check out the myriad of restaurants and stop for some fun on the carousel.

Ride a cable car– you have to do it at least once, it’s quintessential San Francisco!  While the process of riding the car isn’t that complex the stations can be absolutely packed.  Ask your hotel concierge where the closest (and least busy) station is to save yourself the headache of waiting in line.

*City Pass gets you a significant discount if you plan on staying for several days and want to see all the classics.  Pricing includes unlimited trips on Muni trolleys, buses, historic cable cars and Muni Metro for three consecutive days, entrance to California Academy of Sciences, Aquarium of the Bay, Exploratorium, and a one hour bay cruise adventure past Alcatraz, Golden Gate & Angel Island.  $94/74 adults/kids under 12

San Francisco is known for its food scene and has an amazing diversity of dishes to try.  From the burritos in the Mission to the dumplings in Chinatown San Francisco has it all. If you’ve got kids with an adventurous palate you’re in luck (we get a 1 out of 2 on this, our first child thinks pasta and corn are life).  I’ve listed some of the classics that would appeal to families or kids but I’m also a fan of asking your hotel front office or concierge where they like to eat. Sometimes they’ll give you a canned answer to a place they have a deal with but often they’ll give you a local favorite.

Mac’d– outside of the box mac and cheese (Russian Hill)

How to Get Around

Average temps in San Francisco are 40-70 degrees nearly year round so it’s best to layer up as the area is known for fog and periodic rain.

While San Francisco is generally considered a safe travel destination keep an eye on your valuables and when on public transportation be mindful of pickpockets.

There’s a visible homeless issue in San Francisco though less prevalent in the main tourist areas.  There’s been some incidences where panhandlers have been more aggressive. Avoid the tenderloin district particularly at night.

San Francisco on a Budget: A Family Focused Itinerary