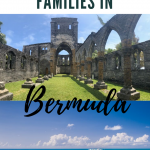 If you find yourself on the small island of Bermuda whether it be via cruise or you choose a longer island stay, there’s plenty to keep your family busy.  From pink sand beaches to historic downtowns there’s activities for all ages. We explored the island over two days since it was part of a cruise we took but would love to go back and actually stay on the island.  It was beautiful! The great thing about Bermuda is its size. Comprised of 138 islands which form a fish hook-shaped land mass, it’s smaller footprint means you’re able to cover more ground in a shorter period of time.

It’s very friendly to tourists as it’s their second largest industry with half a million visitors per year, 80% of which come from the US (the number one industry is offshore banking due to their nonexistent corporate income tax if you’re curious, I was!). It ticks a lot of boxes for families as it’s easy to get around and has a great safety record.

The busiest season is from May to October when the temps are the warmest (it’s also worth mentioning that’s hurricane season so travel insurance is a good idea).  Winter in Bermuda can be comparatively cool with temps in the low 70’s. A great shoulder season is March and April when the weather warms up but prices are still relatively low.

Ranked frequently as the Number 1 beach in Bermuda, this blush sand beach located in Southampton is a popular spot for families.  It also makes it one of the more crowded beaches so arriving early ensures you’ll get a good spot. There’s lockers for rent, a changing area and bathroom, and a small restaurant and bar serving up the basics (chicken tenders, fries and burgers).  It’s worth noting the waves can be a bit rough with a stronger undertow so always use caution but there are lifeguards which you won’t find on every beach (we took a taxi both ways, two moms and three kids under 5 which sounds insane but was doable).

In 2000 this little gem became a UNESCO world heritage site due to its well preserved colonial era buildings.  Bermuda is considered a British island territory and still holds firm to those roots. Check out the main square where you’ll find the original Town Hall, Rectory and Old State House (we went back and forth via ferry) and did a walking tour we found in our Lonely Planet Guide for more information on the individual sites.

As part of your walking tour of St. George, trek uphill to the historic church that started with construction in 1864.   Due to lack of funding and inability to meet eye to eye creatively the work was abandoned. It’s lovely Gothic architecture and surrounding views make it a popular stop off.

If you’ve cruised to Bermuda this will be your port.  It’s where you’ll find the National Museum, restaurants, pubs, and shops where you can pick up some last minute souvenirs.  It was at one time the base for the Royal Navy in the Western Atlantic.

The pinkest of all the blush sand on the island, this beach is also known for being the most family friendly.  An offshore reef keeps the waves relatively tame and there are several restaurants within walking distance.

If you’ve arrived in an off season or the weather is less beach-like there’s still several activities to keep you busy and experience some of the island.

Located in the Royal Navy Dockyard this museum recounts over 500 years of Bermuda’s naval heritage, history with the slave trade and immigration as well as its tourism industry.

For stellar views of the island you can check out this historic fort which was built to protect the Royal Navy Dockyard in the 1860’s.  There are several surrounding walking trails that also lead to the Railway Trail along the shoreline.

Discovered in the early 1900’s these caves are covered by crystal formations and surround a deep lake.  Bridges run through the cave system and allow you a better look a this natural wonder on a guided tour. Best to arrive early and wear walking shoes.

One of the oldest aquariums in the world this little building is a big hit with kids.  Exhibits on local marine life as well as animal story time, arts and crafts, and animal feedings are reasons kids love it.  It’s also affordable with rates at $10/$5 for adults and children.

If you have older kids who love to golf and want some incredible ocean views while you play, this course is the gold standard.  Refurbished in 2009 it’s pristine and beautifully maintained. It’s also known as being quite a challenge, so bring your A game! Greens fees will set you back $180/pp.  Don’t forget your Bermuda shorts 😉

*Though it often gets rated highly amongst visitors, I’ve left off Tobacco Beach.  Though it does have some great snorkeling, it’s much more of a spring break vibe (at least when we were there).

There’s several methods of getting to various destinations on the island including renting mopeds, bikes (pedal and motorized), ferries, buses, and taxis.

Mopeds have a minimum age of 5 to ride as a passenger (and it’s at the rental companies discretion).  Otherwise if your kids are older it seems like a cool way to get around the island on your own time and schedule.
Getting to St George, for instance, from your cruise port is easiest via ferry but getting to the more popular beaches are easily accessed via taxi.

The taxis are metered and fairly priced and there’s also taxi and van services as well as tour groups that leave out of the port area that operate like a well oiled machine.  If you have a question about how to get around, just ask visitor information when you get off your ship and they’ll give you pretty straightforward information and directions.

This error message is only visible to WordPress admins


Error: API requests are being delayed for this account. New posts will not be retrieved.